Salma Hayek battling in the Volcán del Cuervo, Pedro Almodóvar in Famara, Ron Howard turning El Golfo into the scene of a shipwreck caused by Moby Dick… We’re going to take a tour of Lanzarote’s most spectacular film locations.

“Mars or the Earth?”

“I’ve never seen a place like this before in my life.”

Comments like these from Instagram perfectly summarise the main reasons given by producers, agencies and fashion magazines when contacting the Lanzarote Film Commission to arrange a filming permit.

The island’s unique landscape – forged from volcanoes, cliffs, lapilli, salt flats and beaches – is a magnet for location managers.

There are few places as perfect as Lanzarote to represent the end, or the beginning, of the world. Open Google Maps and create a new map. You could call it “Lanzarote in Film”. Here we go!

Eternals and So My Grandma’s a Lesbian

This is possibly one of the most fascinating places on the whole island. Because of its crater. Because the stones communicate through glints of green and Churrigueresque shapes. Because this is where the earth cracked open in 1730, leading to the eruption of Timanfaya. 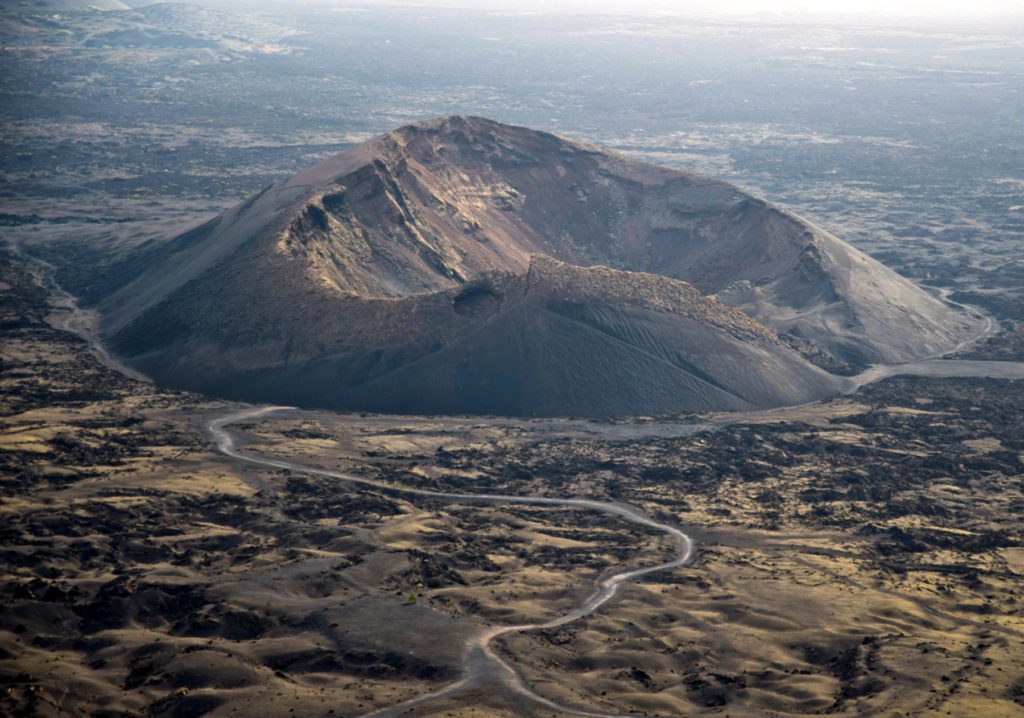 Lucky you. We’re at the Volcán del Cuervo. It’s so easy to feel you are in another world here, that in November 2019, several sequences were shot here for Eternals, the latest Marvel film that will reach Spanish cinemas in November.

When you see Salma Hayek embodying the immortal Ajak and fighting as if she possessed all the combined powers of Bruce Lee and Mazinger Z, remember that the landscape exists; it’s real and can be visited. Remember too that you are in the Parque Natural de Los Volcanes and that to respect the landscape and its ecosystem, you must not leave the footpath.

So My Grandma’s a Lesbian

One of this year’s Spanish comedies was also shot in Lanzarote. Called So My Grandma’s a Lesbian, it features the hilarious Verónica Forqué and Rosa María Sardá, who play two women who are very much in love with each other, in spite of their respective relatives, played by Ingrid García Jonsson and David Verdaguer. Arrecife’s Casa de la Cultura Agustín de la Hoz, a 19th century mansion that once housed the city’s first casino, is one of the varied and beautiful locations for the film, which will be released this April. 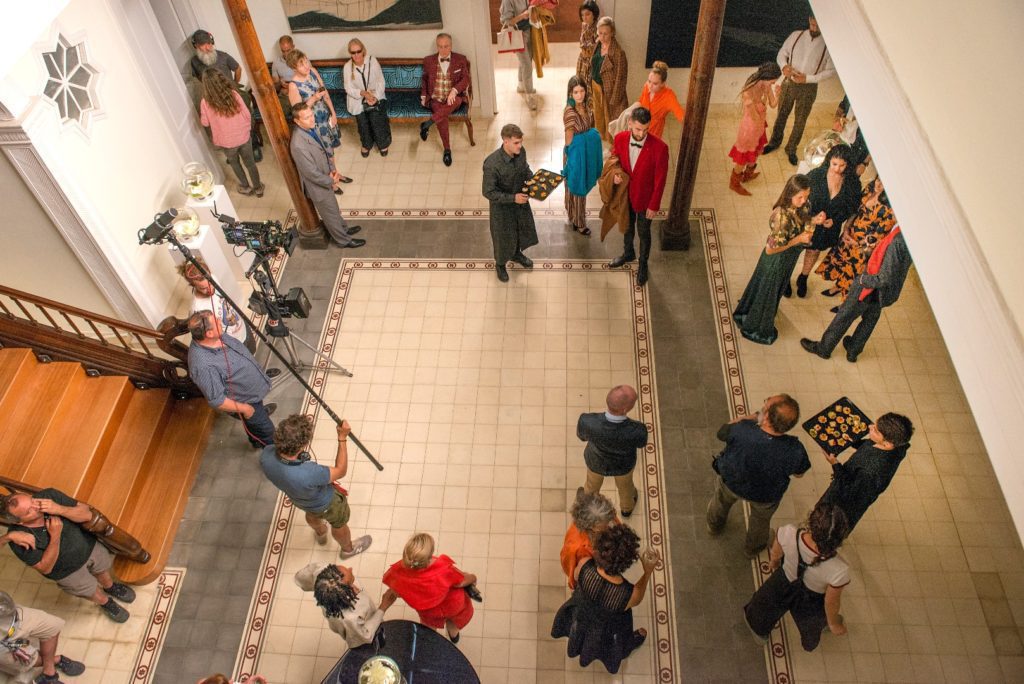 An idyll with Vogue (and haute couture)

“A tribute to our landscapes, craftsmen and traditions.” With this phrase and the tremendous presence of the Spanish models Miriam Sánchez, Marina Pérez and Inés Sastre, the magazine Vogue featured Lanzarote on its front cover in this year’s February edition.

This is not the only brand that has Lanzarote on its list of favourite locations.

Jonak Paris has chosen the island’s black volcanic roads and Guatiza’s fields of prickly pear cactus for his new spring/summer 2020 collection. The light and the immense aesthetic possibilities offered by the island have also captivated the creatives working for Loewe and Manuel Ritz. 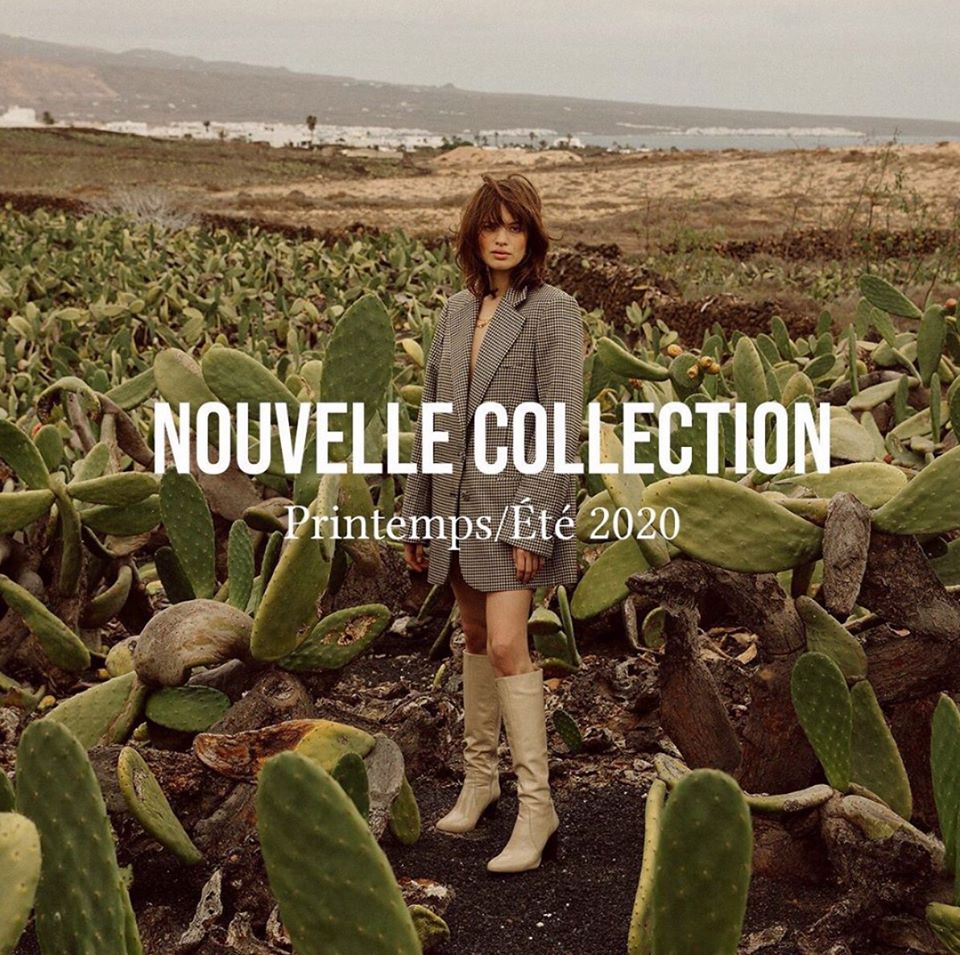 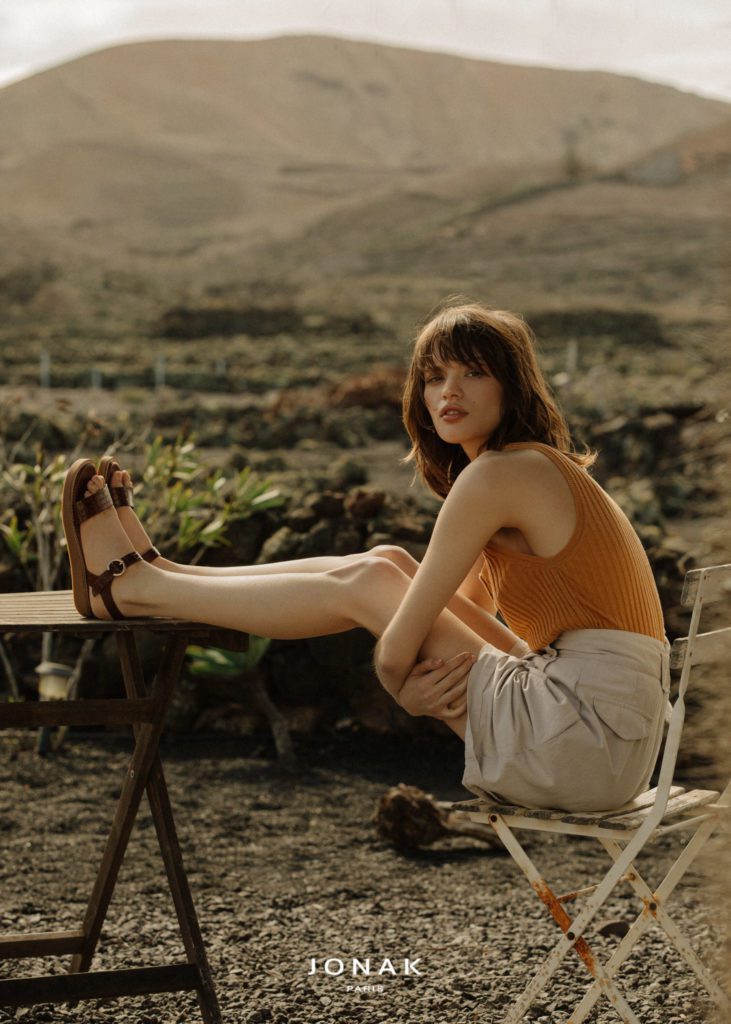 Jacquemus “…wanted something very poetic and graphic, like a Henri Matisse painted on a black sand beach, abstract and very minimalist.” And he got it. El Golfo’s volcanic landscapes played a starring role in his La Bomba campaign.

Zara, Satorisan, Oysho, Roberto Verino… The list is long and a special mention is required for the impressive images that Jean Pierre Attal achieved for Balenciaga’s autumn campaign. 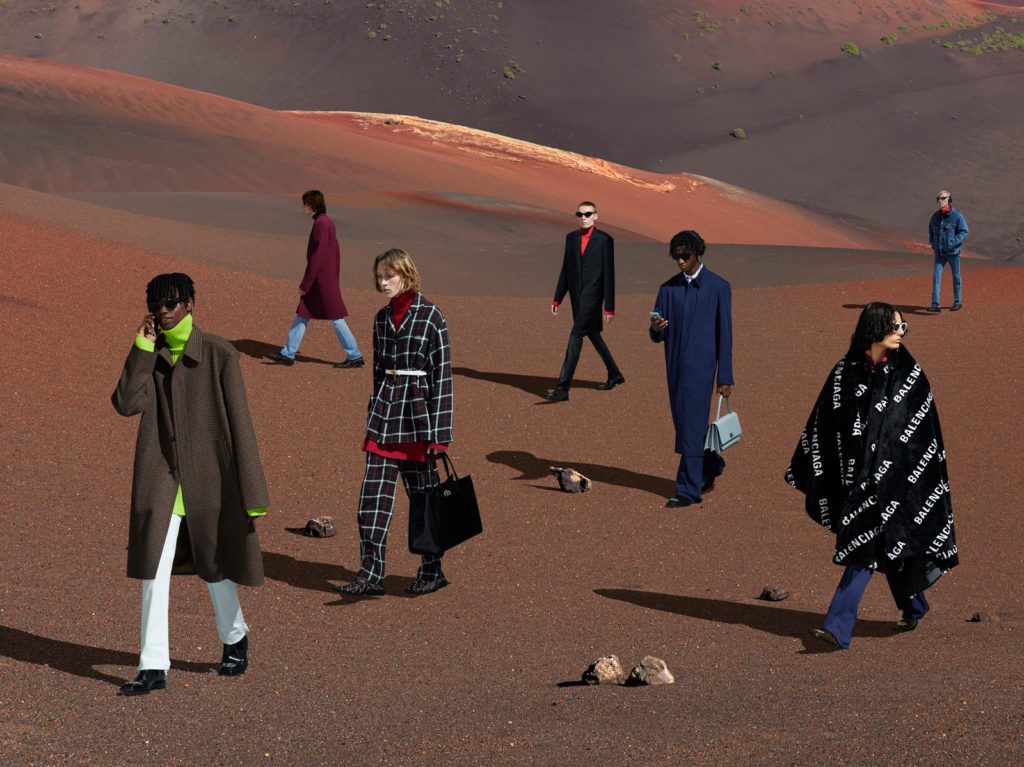 Apart from Vogue, magazines like GQ, Elle and Harper’s Bazaar, which chose the Jardín de Cactus for the photoshoot with the model Niki Trefilova, have all discovered on the island the nuances and light that are so vital to their universe.

After Adidas’s “Not Made for Normal” campaign shot against the island’s Martian volcanoes, the Lanzarote filmmakers Adrian Rodd and Ginés Díaz made a video showing the training sessions of the Ironman world champions.

Roads to meet on

Among the spurge plants, on the road to the Mirador del Río or flanked by volcanoes. This is how Cupra Ateca Limited Edition presents itself on its website. A Mercedes-Benz spot starring the model Paloma Elsesser, another for its E Class campaign, the BMW i8 Roadster… The car adverts filmed in Lanzarote are legion.

The Versys 1000 SE, a Kawasaki motorbike, also sped through Lanzarote in 2019, taking corners along the edge of the island’s most rugged coastline. 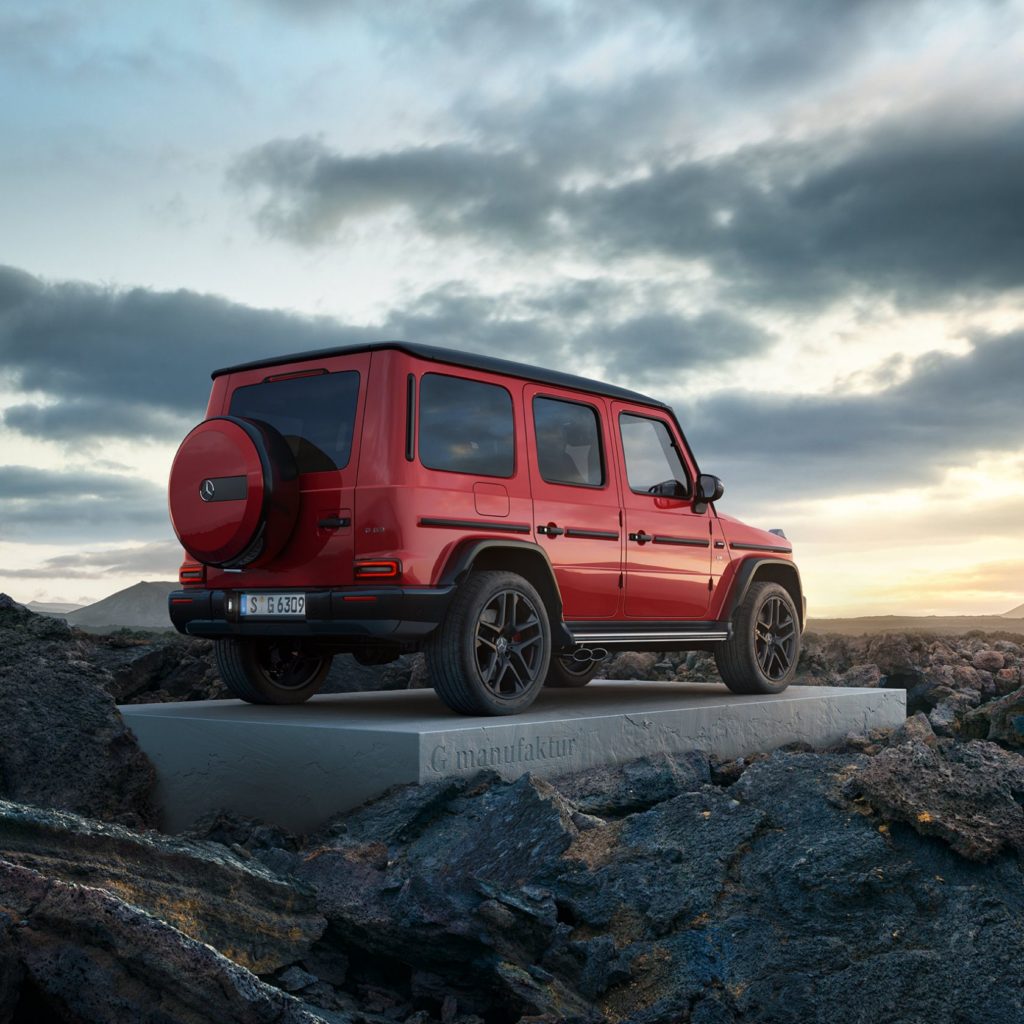 Mercedes-Benz decided to celebrate its 40th anniversary by driving an iconic G Class between La Geria’s traditional hollows and along the LZ-703 road, which leads travellers to one of the best sunsets in the known universe, in Janubio.

With a name like Levante Vulcano, Lanzarote had to be top of the list of locations for shooting the spot for this limited edition Maserati: only 150 units of this brand new lava-coloured sports car were sold, and it posed in a made-to-measure landscape. 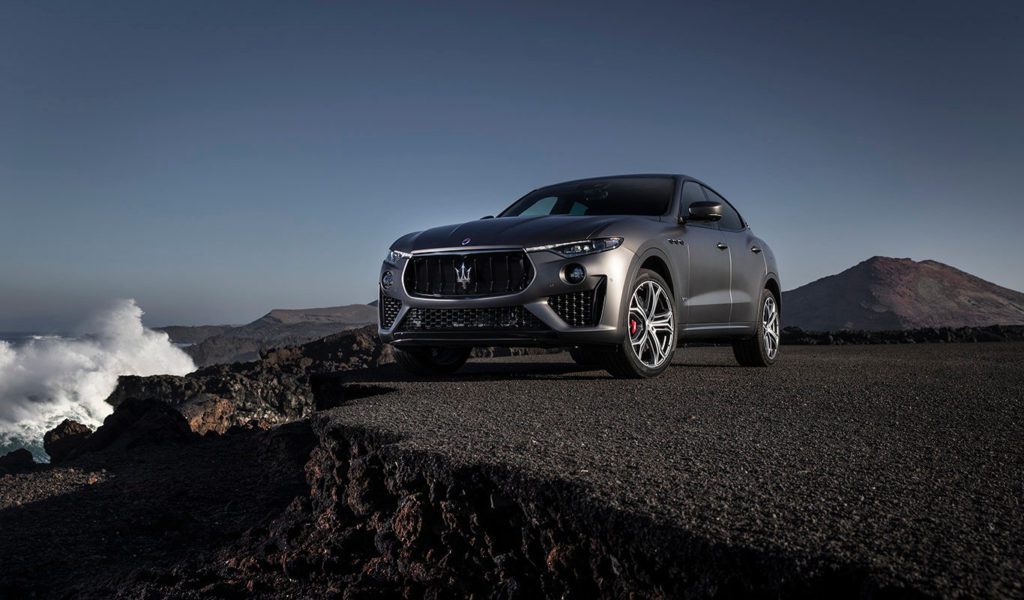 “Rocks ejected from the bowels of the earth that advance mercilessly towards a soulless desert, painting a dark landscape with the scent of ash, inherited from fire and guarded by a black, apocalyptic, impenetrable, desolate horizon.” Boom! Hyundai Canarias chose an aerial view of Timanfaya to display its i20 Black Edition as if it were Mordor’s One Ring, and Gazz – Canarian communicator and YouTuber – provided the precise and necessary counterpoint: “Yes, it is beautiful, isn’t it?” Black is beautiful and you know it.

Photographer Jacqui Kenny was diagnosed with agoraphobia (an obsessive fear of open spaces) nine years ago and last year carried out a remote art production, the first one she had done in Spain. Lexus installed a 360º camera in a hybrid UX and the vehicle began to travel the landscapes of Lanzarote, allowing Kenny to capture images from her flat in London. Our island was chosen because the photographer has always wanted to visit it and because it connects with the adventurous spirit of the Japanese company’s high-end crossover.

The song Universo by Blas Cantó, who will represent Spain at the next Eurovision Song Contest in Rotterdam and which has already received more than a million views on YouTube, was filmed in the landscape left by Lanzarote’s historic eruptions.

The Italian singer Annalisa also chose the island to film Il Mondo Prima di Te, the song with which she won third place at the Sanremo Festival. In October, the Galician band Heredeiros da Crus published a photo with César Manrique’s devil at the gates of Timanfaya on their official Facebook page, saying that they wanted to shoot their next video clip here. 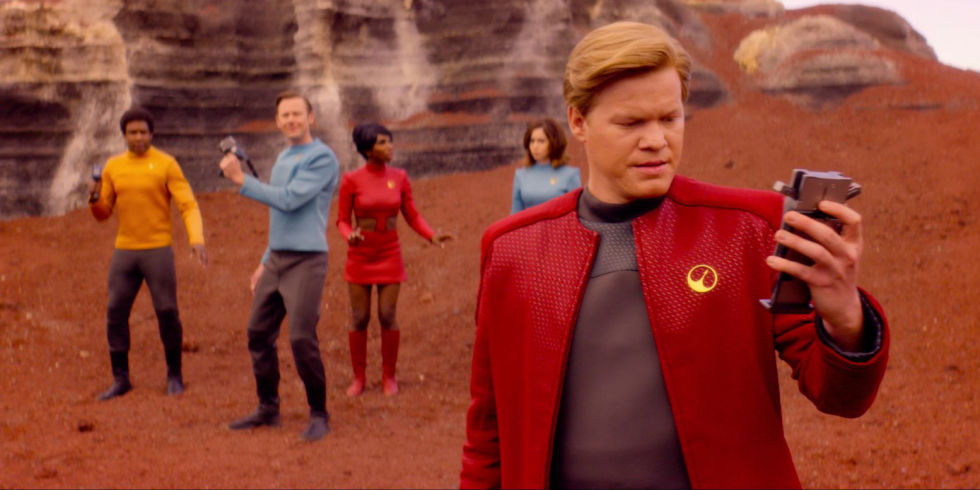 The revolutionary series Black Mirror shot the first episode of its fourth season in Lanzarote, showcasing the fascination for the aesthetics of 1970s science fiction.

The actor Alex García starred in the launch of the Canary island beer Dorada Especial Esencia Negra “in a place that is unique to our islands.” And if we want to talk about genuine experiences, Lanzarote’s Malpaís (or Badlands) is unbeatable.

Carrefour and Last Minute also chose the island to shoot their spots.

Who would have said in 1965, when Raquel Welch filmed One Million Years B.C. in the coves of Papagayo that film production on the island was going to prove to be a sustainable and lasting business model?

The mansions of Tegoyo played a starring role in Even Dwarfs Started Small, the feature film of the acclaimed director Werner Herzog. Pedro Almodóvar shot several sequences from How to be a Woman and not Die in the Attempt and most of Broken Embraces. Mararía, Journey to the Center of the Earth, Invader and the blockbusters In the Heart of the Sea and Clash of the Titans also just couldn’t resist Lanzarote’s amazing horizons, which you now have before you. 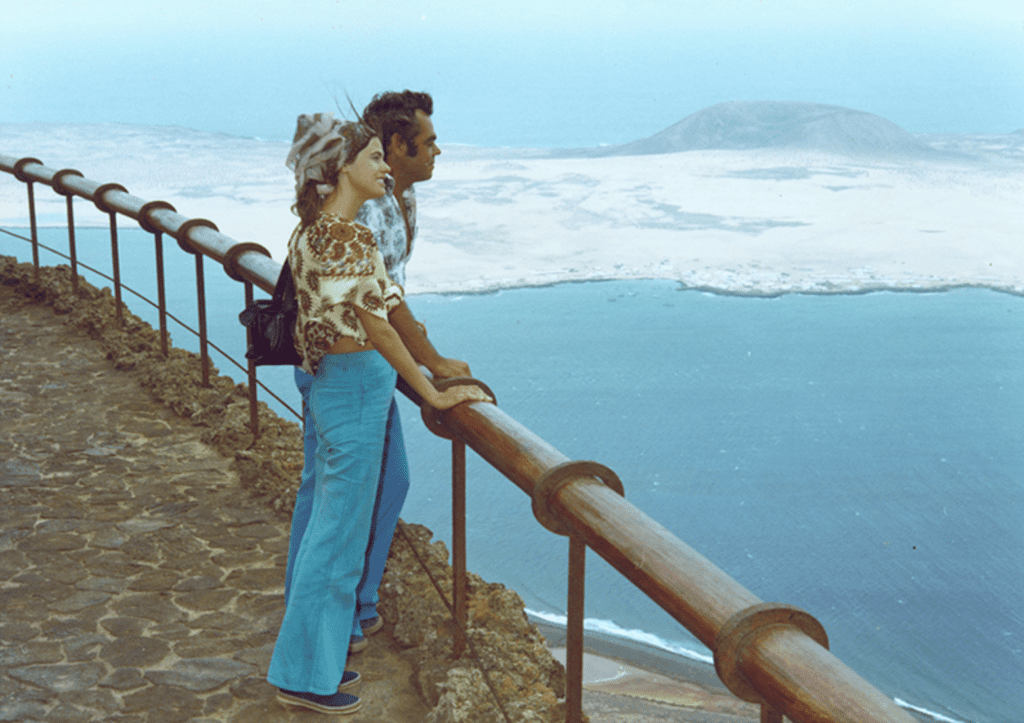