You are here: Home / Inspiration / Lanzarote’s Original Soundtrack: sounds and colours of a fascinating nature

Lanzarote’s Original Soundtrack: sounds and colours of a fascinating nature

The sea lapping at the shores. Birds winging over the islets. Palm trees playing with the wind. The mulberry trees plumping up their fruits. The insects weaving their nocturnal architectures. This is the pulsing of a confined island’s nature.

We’re all longing for hugs and humanity.

Last night we dreamed of sharing a massive toast at sunset. We were drinking a glass of chilled white wine. One produced from grapes cultivated in the artisan hollows of La Geria; one of those wines that preserve the memory (and the aromas and minerals) of this land forged by fire and fed by traditional farming knowledge.

While we are waiting for that longed-for scenario that guarantees the health of the local population and all those travellers who would love to visit us, we have been dedicating ourselves to the contemplation of the nature around us.

Spoiler alert: the flora and fauna remain unaware of the pandemic.

Not even Adobe could give names to the full range of blue, green and grey that make up the magic of the Atlantic at our latitude.

Remember the translucent water at Caletón Blanco? What about the turquoise welcome you get from the steps at Arrieta or the secluded natural pools at Punta Mujeres? There they continue, watching the current flow by, empty of people, but full of life and of the seafaring song of the yellow-legged gulls, preening themselves peacefully on the rocks.

To the north, the vastness of Famara beach is now infinitesimal. Six kilometres of sand sprinkled with life: algae, sponges, sea snails… Here silence is impossible but peace is guaranteed. The foam crackles, breaking into iridescent bubbles. Along the tide line are the remains of algae and sponges, together with all those microplastics that we battle against in our on-going communal beach cleaning sessions. The roar of the northern currents is unrelenting.

How strange it is to see the Playa Chica or Playa del Ancla empty, without children screaming like mad “I’ve seen a sea cucumber, Dad, a sea cucumber!”  Schools of Canary damsel with their characteristic electric blue fins continue to swim near the rocks, together with the colourful Mediterranean parrotfish.

Perhaps the ones we miss most are the rock goby and the crabs in the rock pools. Or the bottlenose dolphins that are now approaching right up to the docks in the marinas.

A few days ago, a storm threw almost 40 litres of water per square metre at Lanzarote, first in a thundering rainstorm, then in a thin curtain of rain that looked like it had been commissioned for a film.

The ravines regained their natural water course and the thirsty land drank deeply. With the sunshine that we have had in the days that followed, spring will have hatched out in Jurassic greens and buds eager to grow.

The native oats will be waving to the rhythm of the breeze, in a nervous dance of thin spikes. We’d love to get out into the field to search for the specimens included in the “Guía Visual de la Flora Vascular de la Reserva de la Biósfera de Lanzarote” (Visual Guide of the Vascular Flora of the Lanzarote Biosphere Reserve), a jewel for lovers of botany and for any traveller who likes to walk the trails armed with the curiosity of the explorer.

Among the cliff rocks the dwarf gouty houseleek (Aichryson tortuosom) will be flowering with its characteristic yellow show. The tree houseleek (Aeonium balsamiferum ) will be presenting its bouquets and on the Famara cliffs the fragrant tajosé (Thymus origanoides) will be showing off its pink inflorescences. 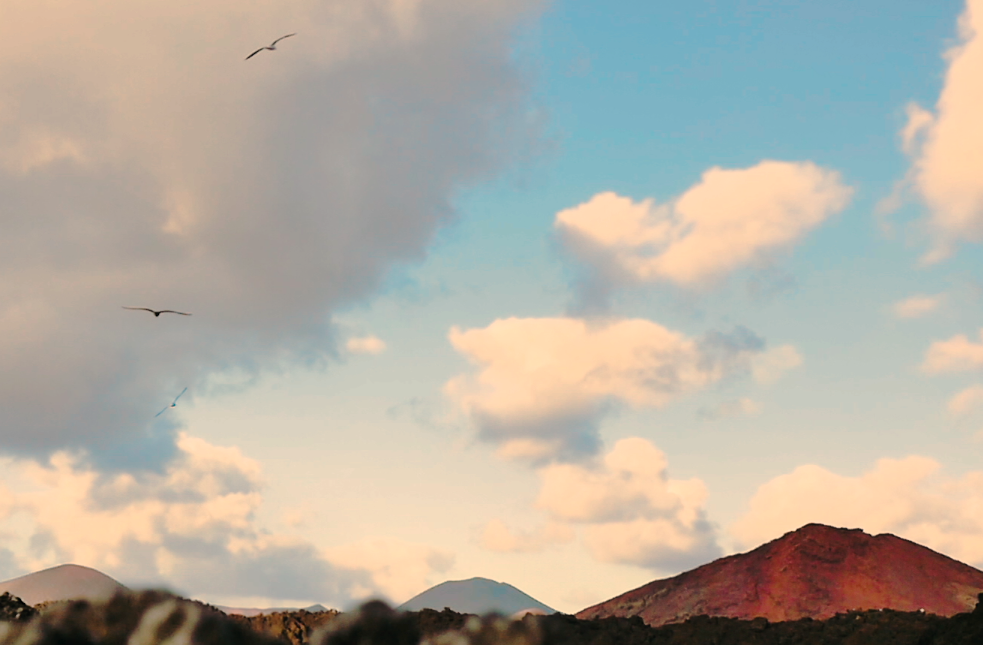 On the islet where San Gabriel Castle stands, a bar-tailed godwit is spiking the water with surgical precision. Plovers preen themselves and hop rapidly among the rocks.

Today, fortune consists of having a window open to the sky or a balcony overlooking the sea. Because the hoopoes, with their punky crests, continue to chase insects, and the crows are still showing off their majestic jet and their incontestable beaks throughout the geography of Lanzarote, while the blue tits’ call turns the rural landscape into a perfect pastoral scene.

In the jable – our fertile white sands formed from crushed marine deposits – the courtship of the Houbara bustard is taking place, one of the most beautiful spectacles in Lanzarote’s ornithological panorama.

The gulls glide in search of the most favourable air current, among cumulonimbus, low clouds and clear skies. Right now it seems like Venus is shining brighter than ever and that we are gazing even more fondly at the craters of the Moon.

The trade winds carry the scents of the ecosystem: the sea air of villages like El Golfo, the smell of preserved sea left by low tide on sunny days, the humidity of the clouds at the peak of Las Nieves, the stews of all the people at home who are continuing to cook…

Timanfaya lives in a perpetual state of emergency 24 hours a day, 365 days a year. Its still, protected seas of transfixed ash won’t be noticing much difference between this April and last year’s.

What will the interior of Volcán del Cuervo sound like today? Maybe we’d hear a pebble roll. In Caldera Blanca and Montaña Cavera, only the wind makes music as it riffs among the stones and the endemic vegetation. 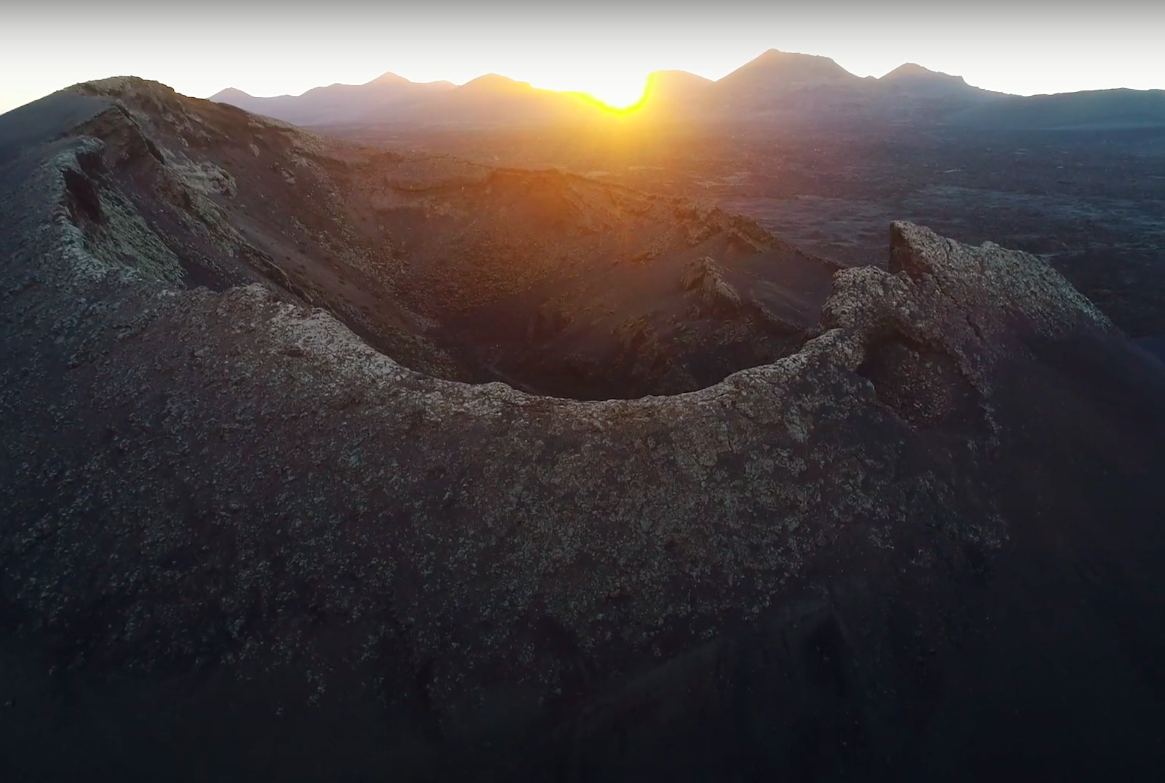 Among the cracks of the lava badlands, the flowers of the endemic verodes (Kleinia neriifolia) will soon open. What texture will the lichens have? Will navelwort have sprouted in the hollows?

Everything here is linked to fire. In ten years, we will be commemorating three centuries of history since the eruption of Timanfaya, a before-and-after moment in the life and geography of this island. They say of this place that it is not a dead land so much as a newborn one.

Today we crossed off another day on the calendar. Today we are that little bit closer to composing a symphony following the baton of nature. 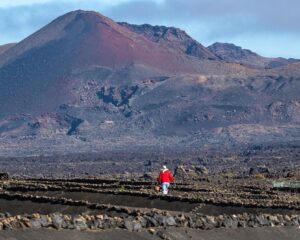 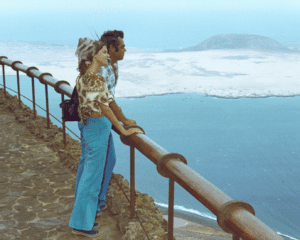