TÍAS This is the central southern part of the island, in a municipality that lives in thrall to the sea and whose coastal region is home to the tourist areathat offers most accommodation on Lanzarote. A CASA JOSÉ SARAMAGO A Casa, is "a house made of books”. That's how José Saramago, winner of the Nobel [...]
SAN BARTOLOMÉ Situated in the centre of the island, is where the Lanzarote's airport is located. Despite the fact that its coast is less extensive than that of other municipalities, Playa Honda is home to one of Lanzarote's largest residential developments. MONUMENTO AL CAMPESINO (House-Museum of the Farmer and the Monument to Fertility) In the geographical [...]

YAIZA The first military enclave was set up in this zone, the first place of conquest and the first European, centre of the Canary Islands archipelago. Yaiza is at the southern end of Lanzarote, sharing with Tinajo part of the Timanfaya National Park. THE TOWN OF YAIZA The town of Yaiza is located on the edge [...]

TINAJO The municipality of Tinajo occupies the central western part of the island and is marked by its volcanic nature, especially by the eruptions originating from Timanfaya and from its highest volcano, known as Tinguatón, part of which is included within its boundaries. These have covered a large area of the municipality in lava. PLAZA [...] 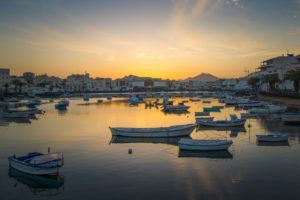 ARRECIFE Arrecife is the capital of Lanzarote since the second half of the 19th century becoming the administrative and commercial centre of the island. It has always had a maritime atmosphere, a historical role as a strategic defense place and a city aimed at developing commercial and commercial relations. CHARCO DE SAN GINÉS (San Ginés Lagoon) [...]