You are here: Home / Inspiration / The Beauty of Common Sense: 365 Days to Celebrate César Manrique

The Beauty of Common Sense: 365 Days to Celebrate César Manrique

Chalk. Bone – the broken bone. There are many types of white, but none has as much impact on the eyes as Lanzarote’s version. To find the elements responsible for this brightness, one would have to travel to the past. In the absence of a time machine, exploring the roots that inspired César Manrique’s extraordinary work is a good place to start.

Every day holds a little bit of April 24th.

It so happens that celebrating the birthday of the artist who transformed Lanzarote also means celebrating the functional architecture, brilliantly adapted to the environment, that we inherited from those women and men who carved out an existence against wind, drought and lava.

Observation of the environment. Adaptation. Wisdom. Care and order. Who could have offered more?

The 1960s were in full raging flood when a group led by César Manrique travelled around the island making an inventory of chimneys, walls and gardens made of dark black stone that rivalled their Japanese counterparts in terms of Zen serenity.

The excursion stopped at the enthusiastic cries of the artist, who had suddenly caught sight of a peasant dwelling and wanted to visit it immediately to praise the taste, very didactically, of its surprised inhabitants. 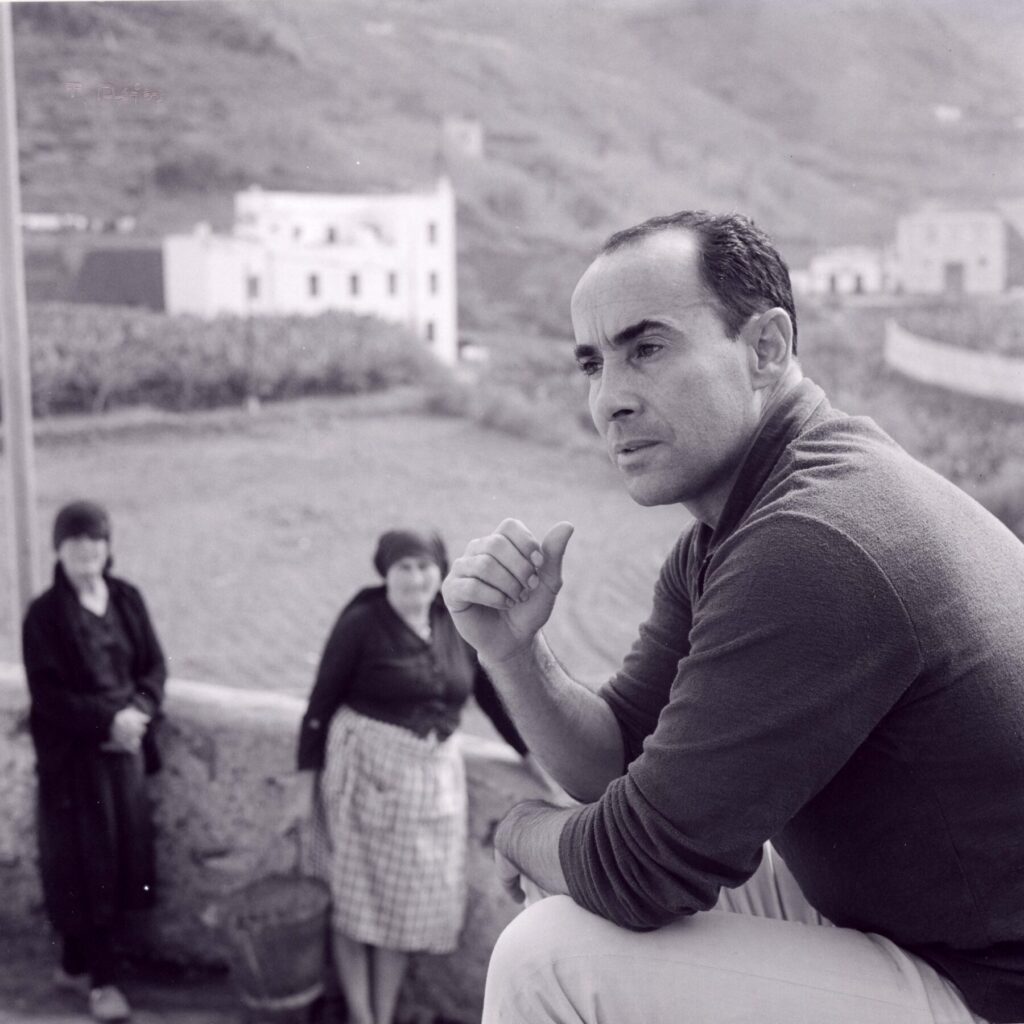 César kept all these jewels in his mind’s eye and included them in the book Arquitectura inédita (Unpublished Architecture) published in 1974 and which gathered photographs, texts and poems about Lanzarote’s vernacular constructions:

All these elements are “full of wisdom and sense“, said César. Because they were learned through “the experience of centuries of observation“, based on an understanding of the climate, latitude and dominant winds of this land that sometimes, incredibly, looks like the playground of a giant child.

“To have been born in this burnt-out geology of ashes, in the middle of the Atlantic, conditions any moderately sensitive being,” wrote Manrique.

The phrase is loaded with logic and its truth can be seen in the expression of any islander when they return from any inland territory to bathe again in these waters. Delight. Passion. Peace!

César played throughout his life, madly in love with the nature around him. Algae, sea snails, sponges, bubbles of sea foam, rocks, pebbles, shells of baroque shapes, volcanoes of impossible colours and primitive forms… His aesthetic sensibility led him to look deeper. In Lanzarote’s nature he found first, ingredients for his games and then, answers to his questions.

This backdrop of sand, salt and fire “surrounded my childhood and manifested itself in all my artwork, with as much huge freedom of expression as the brutal surface of the island itself.”

If there is anywhere this can be appreciated, it’s in the public work that he built with the team of Lanzarote’s Centres of Art, Culture and Tourism. Here it shines through:

Those domestic constructions, put together from modules like the pieces of a puzzle that César admired so much, were admirably drawn by Santiago Alemán in a work of art called Lanzarote, arquitectura tradicional (Lanzarote, Traditional Architecture).

These inventories were a fundamental basis for the public work that César carried out in Lanzarote, at the intersection of nature and art.

The Mirador del Río was inaugurated in 1973. Embedded in the cliffs of Famara, it was a test he passed with outstanding results: the verification that the human being could dialogue with the natural environment without shouting at it, respecting its essence and at the same time achieving an artistic and functional space for the tourist economy.

Years before came the Casa Museo del Campesino with its balcony, its fireplace, its sloped roofs and its green woodwork. In 1970, he directed the creation of the El Diablo restaurant. The pop aesthetic (those pans converted into beautiful lamps) was kept to the interior. Outside, there is nothing to distract from the lava fields: just a dry trunk and the skeleton of a dromedary. Can you say more with less? The landscape speaks for itself.

Very few artists manage to be recognized at a glance. Manrique achieves this every time a traveller, without knowing it, appreciates that he is walking around one of his works. “This is a Manrique, isn’t it?”

They all have a rounded air that converges in nature. They provoke a sensation of care for the environment, of consciousness and of roots. But at the same time they are soaked in contemporary modernity, in the land art movement and in brilliant pop art.

They are deeply from here, they could only be here, but they converse with the whole wide world.

Perhaps it is in Jameos del Agua where César accelerated his creativity by pushing the pedal right down to the ground, accompanied by a team of creators, artists and craftsmen without whose contributions his dream would have been impossible. Is it possible to respect geology, connect with the cultural tradition of the island and create a space for the operatic enjoyment of the senses? Yes, it is possible.

Manrique moved away from décor, shells and tourist standards. He loved and valued the mills, the quarries, the flora, the volcanoes and the cliffs. He turned the Fortaleza del Hambre (Fortress of Hunger), so called because of the hardships that were experienced in the mid-18th century during its construction, into a castle dedicated to contemporary art.

He transformed an old quarry in Guatiza, used as a common rubbish dump, into a garden with more than 600 species of plants adapted to the severe rainfall regime of Lanzarote.

César never completed his studies in Architecture, but his art training at the Academia de Bellas Artes de San Fernando in Madrid and that unbreakable, irresistible combination he created of art and nature made him the essential creator of so many spaces that we admire and experience in Lanzarote today.

“Manrique had a special intuition for creating unique and eloquent environments combining architecture, fine art and landscaping”, says the Foundation that safeguards and communicates his legacy.

He treated his architecture as an artwork that was always based on the pillars of the landscape. With complete naturalness, he ensured that the concepts of architecture created by the peasant farmers of Lanzarote were collected in the exhibition Architecture without Architects, at New York’s Museum of Modern Art (1964).

César is in the ovens, in the dovecots, in the courtyards, in the presses, in the hollows of La Geria, accompanying all those who explore the island on foot, slowly, and who want to know the name of the winds and recognize the seed of a fig tree.

Lanzarote holds César and all those who love the nature of this beautiful, complex, transforming and radically fascinating island in every pore of its ancient basalt. 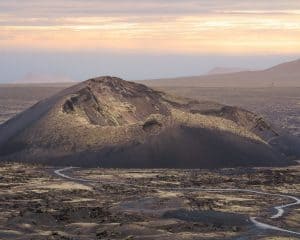